G.S.B. Sabha, Mumbai, organizes its Annual Adhyatmik Programme A Talk on “The Need for Spirituality in Modern Life”

Sabha’s annual Adhyatmik programme was held on Sunday, 2nd December, 2018, at the I.M.Pai Hall of its newly renovated Kreeda Mandir.  Smt. Sanjivi Bhat, the founder sponsor of this program, had passed away earlier in the year, so the program began with a 2 minute silence in her memory.  The Mahila Shakha bhajan group did a great job of setting the atmosphere with their melodious and soulful rendition of bhajans at the start of the program.

The speaker, Mr Tushar Pradhan, is both the Chief Investment Officer of HSBC Asset Management Company, as well as the Regional Coordinator for the Heartfulness Organization.  Mr Pradhan spoke from his personal experience, of how his meditation practice over the past 17 years, had supported him through the pressure of overseeing the investment of crores of rupees in his work life. 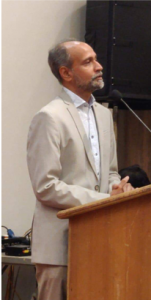 He spoke as a parent, of how children learn from example; from watching what parents do rather than what they say, and how important it was to be consistent in displaying the behaviours we want our children to display.  He shared his experience of having to work with people with whom he was not compatible, and found that the moment he introspected on what lesson he was supposed to learn from the other person’s behaviour, and acted on it, the person was removed from his path in the most natural fashion.  So his message to all of us was, instead of stressing about events and people that pose a challenge to us, we should identify and learn the life lesson we are supposed to derive from the experience.

Mr Pradhan ended with an appeal to all of us to meditate every day – though it might be difficult at first, to try, try again until we are able to meditate for at least 20 minutes a day, preferably at the start of the day.  He introduced us to the Heartfulness Organization –www.heartspots.heartfulness.org / [email protected] /1800–103–7726 and extended an open invitation to all to experience the power of meditation with a trainer. 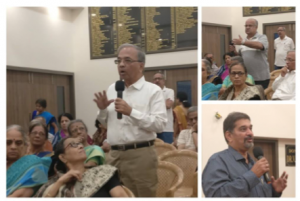 Highlights from the 2018 Annual Adhyatmik Programme

After a lively question and answer session, a Vote of Thanks was extended to Tushar and Meghana Pradhan and the bhojan prasad was consumed with relish.

Sabha remains grateful to the sponsor, co-sponsor as well as all sevadars for this years program.

admin
Past
Comments Off on G.S.B. Sabha, Mumbai, organizes its Annual Adhyatmik Programme A Talk on “The Need for Spirituality in Modern Life”